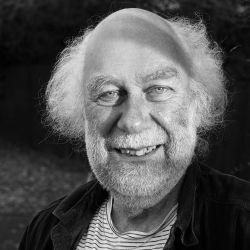 pełnił w Europejskim Ośrodku Studiów Penologicznych funkcję konsultanta w sprawach europejskiego i międzynarodowego prawa karnego, teorii i dogmatyki kary kryminalnej oraz historii zbrodni i kary.
Professor of Law (since 1995), Department of Law and Criminology, Aberystwyth University A writer, researcher, teacher, reviewer and academic strategist, and at present a Professor of Law at Aberystwyth University. Studied at the Universities of Oxford and Exeter. Specialist field: the normative, social scientific and cultural aspects of the interrelation between individuals and groups and organisations, both historically and in contemporary society, and at national, European and international levels. A teacher and researcher at Aberystwyth University since the 1970s and Professor of Law since 1995, teaching undergraduate and postgraduate classes in Law and Criminology, and providing research supervision, both in Aberystwyth and elsewhere. Author of several books, academic papers, reviews, reports and other pieces on legal, criminological and historical subjects.

He has carried out teaching and research in the fields of European law, International law, penal and legal theory, and the history of crime and punishment. A full list of publications is appended for reference. For detailed information in relation to research activity, publications, internal and external collaboration, and postgraduate supervision, see : www.aber.ac.uk/law/harding.

Much of his recent research activity has focused on the legal control of business cartels, as both a legal and criminological enquiry into the nature and regulation of business collusion, and on the emergence of the EU regime of criminal law. In relation to some of his research into business cartels, he was award a grant of £87,743 by the Leverhulme Trust in 2012 to carry out research into the impact of anti-cartel sanctions (2012-14, see: project web site at www.aber.ac.uk/en/law-criminology/research/cartel-collusion), and also in 2012 awarded a grant of £5,185 by Aberystwyth University for the development of a pilot computerised simulation programme for plotting decision-making in cartel participation and legal enforcement activity. He has presented submissions to governments (Australia, New Zealand, UK) regarding proposed legislative change on cartel criminalisation (see list of publications). He is actively involved in promoting and supporting research into the emergent EU criminal law regime, through collaborative projects involving other European scholars and practitioners (e.g. research into the scope, objectives and juridical character of EU criminal law, centred on collaborative meetings at the College of Europe Natolin Centre in Warsaw in 2013 and 2014). In 2011, he was a visiting research fellow working within these fields at the University of Leuven.